I recon I've been done over!!

I recon I've been done over!!

A couple of weeks ago we took our dog to the vets for his annual booster jabs,  during the discussion we mentioned our plans to go again to France in May. The Vet said we should be aware that things surrounding the Pet Passport Scheme were set to change, and suggested that after January 2020 it could become obsolete and described a senario which involved blood tests, certificates issued by authorised Vets, which provided proof of sufficient anti rabies anti bodies in the dogs blood.

Having already had the rabies jab last year prior to a trip to France and Belgium we only needed the test, a mere £133 !

Today we were told there we insufficient anti bodies and the jab would need to be repeated followed by another antibodies test £200 in total, with no guarantee that this would be successful.

Now am I right in thinking that during the "Transition Period" things will remain the same. That the pet passport scheme will continue to be operational.

What happens after January 2021 is still up for grabs and it may well be that we are classed as a third country, with changes to the paperwork needed to take your pet into the continent, this may well result in the situation outlined by the Vet.

If you are in the same position as we were, take a moment to challenge the vet as to the validity of their claims as I feel they may be wrong in their assumptions and you lighter in the pocket as a result. I've seen and heard nothing that supports that situation, caught us at a time when our holiday plans could have gone up in smoke!!

Sorry to say, but you've been done as you suggest. You are correct in that during the transition period nothing changes.  We had the rabies jab last November costing £55 and no mention of further tests. My advice would be to find another vet.
_________________
Regards

We asked our vet in Havant a few weeks ago as our dogs next rabies is due in mid February. We were told hang on till end of month and see what happens as we don't want to take your money!

Great advice, never heard that from a vet before.

Cheers All,
Feel that I was persuaded to have ,and pay for an unnecessary test. May well log a complaint with the vet.
Will definitely check out the advice line.

phil1855 wrote:Cheers All,
Feel that I was persuaded to have ,and pay for an unnecessary test. May well log a complaint with the vet.
Will definitely check out the advice line.

I think you should have done your own research beforehand - easy to do on the DEFRA website. We made the decision to have the blood test done (just under £100) and, fortunately, our dog has more than sufficient antibodies. As Brexit didn’t happen as planned in October we didn’t need the certificate of fitness to travel.

You can ask vets about their prices if you ring round. I did this when I had my dog speyed. There was about £75 difference between the vets in our area.

You can have the blood test done in France - probably cheaper.

Nora,
You are probably right ! 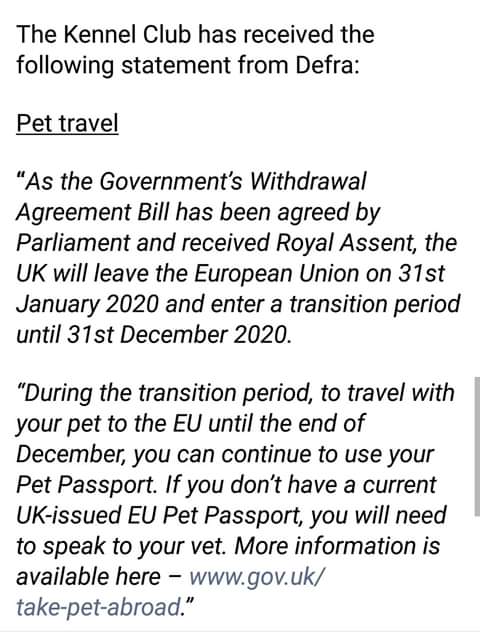 Off to vets tomorrow to get rabies renewed then as it's now due.

Great news we can carry on as usual this year to our beloved France and I will renew the Red Pennant multi trip ins.
------------
Richard