The mention of wipers reminds me of my first car, a 1938 Series 2 Morris 8 4 seat Tourer. It had one wiper, on the driver's side obviously, but driven from a black metal box on top of the windscreen. I wonder how many people brained themselves on the wiper motor in accidents.

My second car was something of a rarity in the UK, a 1953 Fiat 500C, better known as the Topolino and forerunner of the famous, rear engined 500D. The 500C had a front engine, with a rather unique arrangement whereby the radiator was behind the motor and cooled by a fan driven by a belt on the front that had an 'axle' running through the top of the valve cover. For interior heat there was a flap fitted on top of the back of the radiator with two pipes leading inside the car. If oil leaked on the radiator you got warm oil mist inside the car. However the cars most dangerous feature was that the petrol tank was built into the scuttle, with half visible under the dashboard and half under the bonnet. To fill it, you had to open the bonnet. It never occurred to me at the time, but if I'd crashed that car, especially head on, the engine would've pushed back through the radiator and straight into the petrol tank. I suspect the result would have been like a bomb.

I think I could fill pages of motoring sagas after twenty two years at the road side but I will keep to personal car fun.
During my time station in Germany when I had my MG midget a couple of my friends were bikers. They attended a lot of the bike racing in Europe using my MG as transport for there camping gear. It’s surprising what you can cram in.
After a race in Belgium we found a low life had stolen the headlight from the Ducati. He followed me back to camp in the north of Germany with no front light.
When we went to Imala in Italy I had a puncture heading south in Germany. It never crossed my mind to get the puncture repaired during the two weeks we were away. Breakdown cover was not something I even thought of, we were fitters so we didn’t need it.
My mate nearly didn’t make it back from Assen in Holland. After the race the track reverted back to normal road use including buses. He passed me on the start finish straight at silly speed I thought he had seen the bus coming the other way. He passed the bus on the grass on the inside of the bus. After the bus had passed I found his bike wedged in the straw  bail wall he was sat in the field behind it. The ride back to camp was taken at a very sedate speed.

Back when I ran the Morris 8, I had a friend whose dad owned an even earlier, larger Morris, possibly a 1930 Morris 12. One balmy summer's evening we went out in convoy to a country pub. Some other friends arrived in a much newer A35 van, which, when we came to leave, failed to start. So we hitched the A35 to the Morris 12 and it towed the newer vehicle home. A most incongruous sight for other motorists, a 1930's car pulling a 1960's van.

Great tales, especially when it concerns the dreaded rot that especially affected cars of the 60's & 70's.
My first brand new car, a 1971 bright red Escort 1.3, impressed my girlfriend so much that she married me.. at least that's what she told me in later years.
All was good for four years or so, then I noticed the carpet in the drivers footwell was damp. When I pulled it up half the rusted flooring came with it, I could put my feet on the ground through the holes! Like the previous tale, I patched it up with mesh and fibre glass and flogged it on.
Al. 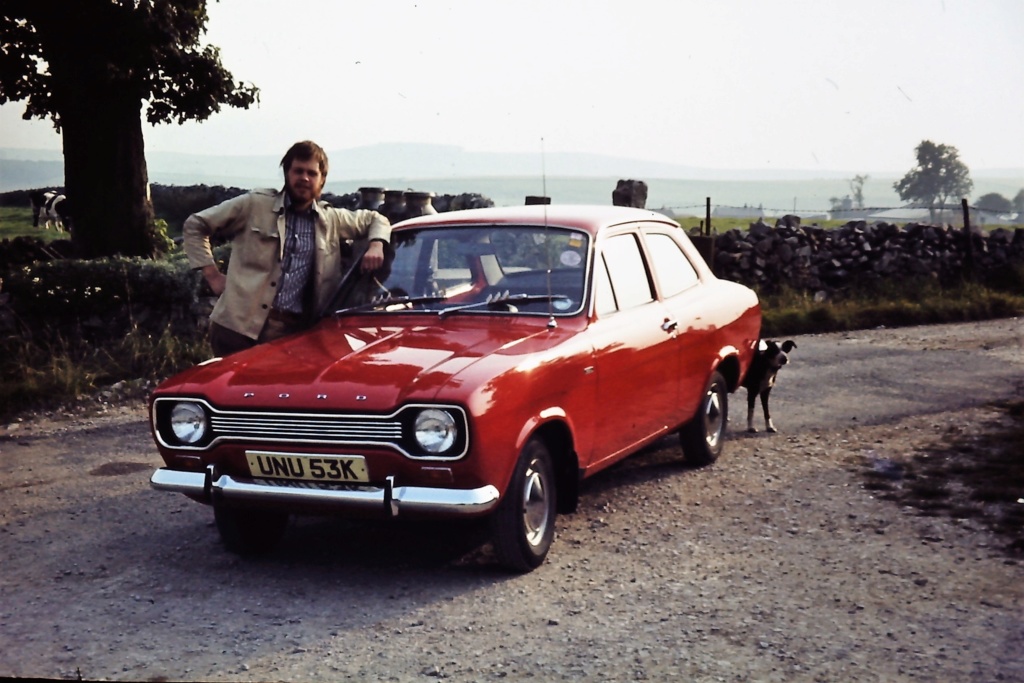 Quality repair Al , most we saw had a couple of newspapers stuffed inside and a skim of 'loy over the top followed by 3 inches  of black gungy schutz to hide the 'repair'

Ha. No such rust problems from my next car, a VW Golf Mk1, arguably the most memorable one I've owned. But maybe that's because of the precious memories of the great outings we had in it as my kids were growing up.
Al. 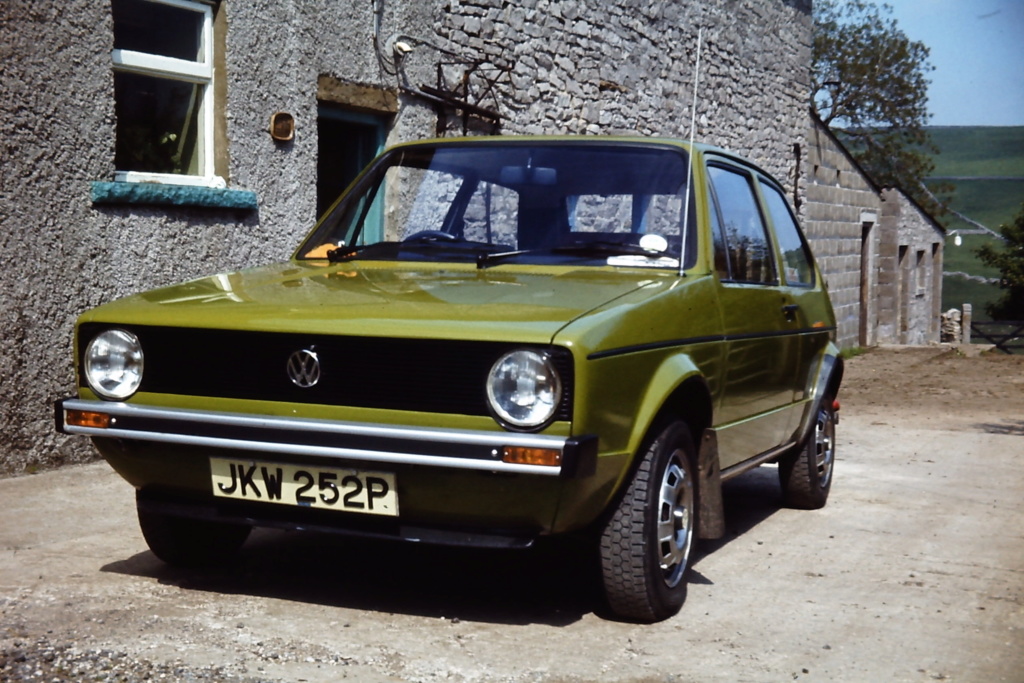 Nice Escort Al,  looks like I'm not the only one that drove around in rust buckets 40 odd years ago.
Lawries post remained me of our first ever Car, an Austin A40 , purchased from another squadie for £25, as with Lawries car the floor was rotten, on the passenger side the rust had eaten away around two sides of the floor pan.
The wife was expecting or son and was nearing her time, on the way into Catterick garrison hospital ,the floor pan on the third side gave in, the passenger seat started to dip towards the ash felt , she managed to stabilise herself by putting one foot in the front shelf  the other next to the gear stick.
Not as dramatic as Lawries episode, however we did get a weird look from the hospital staff at the main entrance .
Whilst she was in hospital ,I repaired the floor with good old fibreglass matting and Isopon resin kit, sold the car for £40 the next day. Our son was born a week later before I went to N.I
Boaby

Being stationed in Germany our cars were BFG  (British Forces Germany) registered and had the equivalent to an MOT every year. My MG passed its test with gaffer tape on the headlights to correct the dip and a piece of gas pipe for a tail pipe. I fitted that that when I bought it from my father.
Happy days that make you wounder how we survived. Driving our motorhomes carefully shows we have learnt to respect what we have got.

Askit wrote:Al, my older brother had the Ford Prefect version in that style. He bought one when he was serving in the forces at a base in England. It had three forward gears and no synchro on first gear (as was the norm then). He picked up my parents, myself and my other brother at the local train station. All was going well until we got to a hill, no way was it going to get to the top with 5 passengers

No synchro on a 1950's Ford Popular, it’s how I came to fail my first driving test at 17. I sensed that I was being deliberately taken up a steep hill to check how skilful I was at double de-clutching. I was making good progress up the hill in 2nd "fingers crossed", then I was asked to drive more slowly, oh dear I try for 1st, fail. Better luck was the next time after I'd had more practice.

My father had a 2nd hand Austin Princess ( from early 50s) with the all corner jacking system). I remember we had a puncture whilst on holiday in the IOW and I was impressed with how it all worked.

My father had a 2nd hand Austin Princess ( from early 50s) with the all corner jacking system). I remember we had a puncture whilst on holiday in the IOW and I was impressed with how it all worked.

I've just re-established contact with a fellow trainee from 1970. At that time, he had one of those from the same era, as I recall a 4 litre engine, and he tells me it is still in use, now painted cream and used as a wedding car.

My brother who was 8 years older than me joined the Flight air arm and always amazed us on what old clunker he what turm up home on leave in.
The only one I can remember, was an ex-Police force MG Magenet with the hand brake along side the drivers door, it went like a bomb too.t still had the two tones,but the blue lamp was bust .
He had an old Areil square four, 1000cc I think ( spelling is wrong), took me out on it. ONCE.
Boaby

Check out the sideburns, 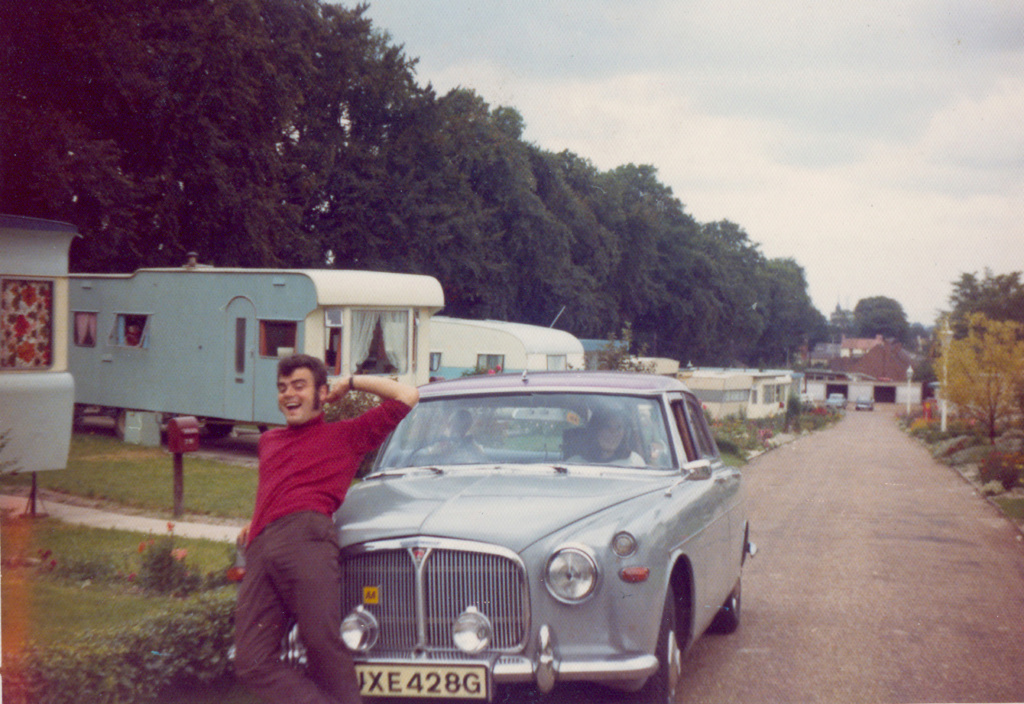 Dubbed 'a gentlemen's club on wheels' I believe.