MMM magazine, latest edition has two page article entitled as above.
Quotes from Geoff Scott -
"We build a quality motorhome that doesn't leak and therefore we're very confident to put wood in the construction"
"Our quality levels have also improved - our warranty claims have never been lower"
"We constantly review the performance of our partners/suppliers and, if we feel there is an issue, we try and help them to improve and if that doesn't work, then we may change supplier"
"We believe the customer is king".

Interesting article if you get the MMM.

Not read that yet

Just been reading this months MMM here too, seems Auto-Sleepers really do "Feel the need" to keep telling everyone what excellent quality they are...

They made a big thing about not using anything but wood during construction as in their opinion it's still the best, yet we see other manufacturers giving 10yr habitation warranties.

They are certainly good at talking the talk, not sure I agree with customer being King, as I never had any kind of acknowledgement, acceptance or apology from the abysmal customer service we experienced with their sister company Marquis. Complaint direct to Geoff Scott went unanswered which doesn't say much does it?

On our third Auto-Sleeper and most probably our last, customer is king? Pinch of salt springs to mind.

Started reading the article and had put it down as I found it difficult to stomach!! Sorry.

Perhaps someone in authority could persuade A/S to put it on their web site then one and all could marvel at  the words of wisdom?
frederic

Tried to scan it in for those like Frederick who've not seen it, but my printer is wireless so it asked for a usb cable to be connected

Sorry about the quality as I took the shots on my iPad but you can just about read it hopefully if you click on enlarge image. 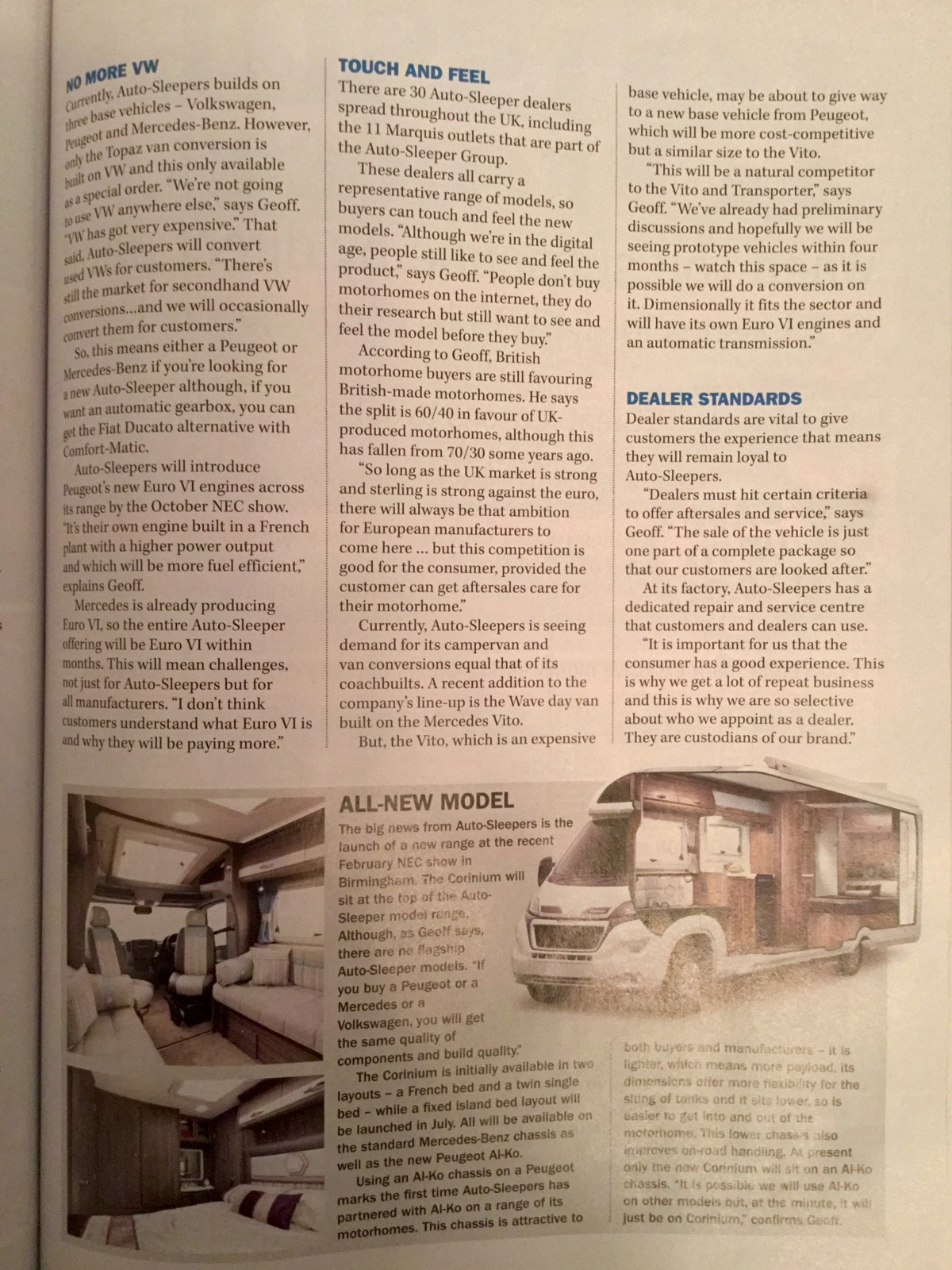 Thanks - able to read it all.
Fred

I read that a couple of days ago, comes across as very good, as I have had only good dealings with Willersley, I cannot  give negative comments, found Mark and also the parts dept very helpful and knowledgeable, but then again I do have an older van.so no complaints from me.
_________________
Be who you are and say what you feel, because those that mind don`t matter, and those who matter don`t mind.

I have to echo Margaret had no complaints with my older Auto Sleeper, but reading the bit in MMM thanks to Crusing Comet for his copy, Id have said it was less the wood and more the one piece fiberglass body that made the name for Auto-sleeper and gave high residual values. Nice as the wood is on edges it was not the b all and end of the advantage of an Auto Sleeper. The ones mainly still going well are the old fiberglass ones for the most part. I am not knowledgeable enough to speak of non fiberglass older models made by Auto-sleeper holding such good value's not sure many were made were they, a lot of good van conversions but was it the wood or the layout/ or in some cases the VW mark...

Not sure my experience of Marquis is as the Customer is king in my recent purchase however a different subject.

I have the MMM original and fully read it, also contributed to this and other web sites, attended the C&C Meets at Malvern, ASOC agm's, owned RV50, Rapport, Ford Legend, Duettox2, T4 Clubman and now a T5 Topaz been in almost all of A/S models and really only the pre takeover models that were overseen/conceived by the brothers were really up to snuff imho. Come back the Clubman style bodied with well sealed in windows (mastic not the later tape sealants)
All my contacts with the factory have had positive results with no complaints but like others we have never had a new 'van, that said we have had interaction with those who have!
frederic

Called in at Willersey last Friday (we were in the area) for their opinion on the bike rack fixings on our Legend. No appointment but they very kindly checked and confirmed that it has been correctly fixed into wood battens.

Impressive service and good to see manufacturing taking place in a beautiful part of the country.

It is a beautiful village, with church village pubs, green and pond. Good enough for an episode of Midsomer murders.

We chatted to some locals who said none of the A/S workers lived there, house prices far too expensive.

Must admit that we used them for hab checks etc whilst Charles and Trevor were running the show but when that mark bloke took over he tried to con us price wise on a Major Conversion.   He misunderstood the the difference between a Quotation and an Estimate that involved a lot of cash (to us) Fortunately it was in his hand over period and Trevor stepped in over a correction on the cost - not been back since and we would not spend any money with the AS Group directly again on a new van. If we had an apology I would put it down to his lack of experience.    I know you all think he is great but then all has gone well for you.  There is no need to respond to this he is a big boy and can defend himself

Well Roger,  I do agree that you can only speak as you find, which I suppose that is all we can do, then again if I am let down or feel robbed I will walk and not return. over the years that has happened,  wiser now in my old age.

roli wrote:If we had an apology I would put it down to his lack of experience.

I know a lot of people seem to think an apology is a sign of weakness, but they could have been watching the nauseatingly self important Alan Sugar too much!!

I have always considered an apology as a sign of strength. It often takes guts to say you are sorry - and mean it!!